Plot:
Plankton is about to succeed in his plan: he will steal the secret Crab Patty recipe. SpongeBob tries to stop him, and as they fight the secret recipe vanishes! What will Mr Krabs sell to his customers now? The news are out and the sea residents of Bikini Bottom go panic. Their world will end without Crab Patty! Wasn’t that enough? Everyone think SpongeBob helped Plankton to steal the recipe. The two eternal enemies are faced with just one choice: to help each other for real and find the lost recipe. The usual suspects will stand by them: Patrick, Mr Krabs, Squidward and Sandy. Does this look like a big team to you? They will all be needed to confront the mysterious Burger Beard Pirate. He has a magical book in his hands, and everything he writes in that book becomes reality (just like in the “Inkheart” movie). That’s how he stole the secret recipe and now he makes a profit from selling Crab Patties!

Our impressions and movie review:
The greatest part of the movie The SpongeBob Movie: Sponge Out of Water is classic 2d animation (ok, ok with a 3d aroma) staring SpongeBob SquarePants. In the rest, the Burger Beard Pirate (Antonio Banderas) with his flock of seagulls, fights against our beloved animated characters in 3d. We love Banderas but he surely had better performances before. Yet, he seems to enjoy the role of the Pirate Captain 😉 Especially when he is up against SpongeBob SquarePants and the rest crew as super heroes.

This movie is for young and elder fans of Bob and his Bikini Bottom friends. If you are a friend of SpongeBob you will see that this movie is faithfull to the animated series. Will you enjoy this film? Aye Aye Captain!

The SpongeBob Movie: Sponge Out of Water – Trailer 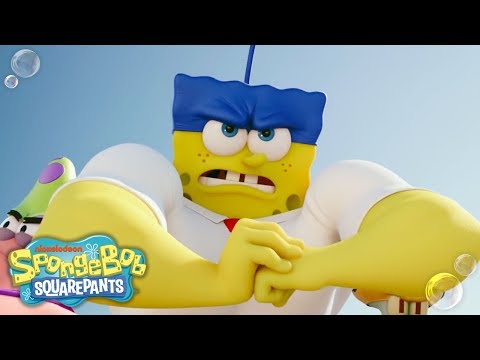