Plot:
In Berk island, somewhere in the distant north, there is a village with fearless Vikings. These tough people are surviving on fishing, farming and hunting… dragons. Of course they are not hunting dragons for food, but to protect their flocks of sheep – dragons do frequent raids for sheep. Stoick the Vast is the chief in that village. His deeds are great and his body is… greater. Stoick has distinguished himself among the villagers with the one and only way a Viking can… killing many, many dragons! He hopes that his son Hiccup will follow his footsteps but, unfortunately, he is not made for a Dragonslayer. He is light framed, but compassionate and an inventive genius. To compensate for his lack of muscles, he has invented a new weapon: a large crossbow that throws a rope around a flying dragon.

Everyone at Berk laugh at Hiccup, because all they understand is the power of hands and swords. But, during one of the dragon raids, Hiccup uses his weapon successfully, and he captures a Night Fury. This is the most rare and scary kind of dragon, and people know almost nothing about Night Furies. Why? Because no man ever survived after encountering one! Yet, Hiccup shot was right on target and the dragon crashes out of the village boundaries (in a small valley), but nobody believes our hero about it.

Hiccup searches and finally finds where the black Night Fury dragon is hiding. Now he can kill him and gain recognition and prestige among his people. But instead of choosing the easy path of murder, he tries to live with that dragon, educate him and… you will see the rest on your TV.

Based on Cressida Cowell’s novel and created by the geniuses of DreamWorks, “How to Train Your Dragon” is one of the most robust animated films. Beautiful plot, amazing scenery, excellent characters, plenty of humor, action and full of life lessons for kids and adults. You know that this is the next DVD you will rent. I hope you see this movie soon and I know for sure that you will enjoy it and love it! Especially Toothless, Hiccup’s black dragon! 😀

Hiccup: Everything we know about dragons is wrong.

Astrid: It’s a mess. You must feel horrible. You’ve lost everything. Your father, your tribe, your best friend…
Hiccup: Thank you for summing that up.
[silence]
Hiccup: Why couldn’t I have killed that dragon when I found him in the woods? Would’ve been better, for everyone…
Astrid: Yep. The rest of us would have done it. So why didn’t you?
[pauses]
Astrid: Why didn’t you?
Hiccup: I don’t know… I couldn’t.
Astrid: That’s not an answer.
Hiccup: *Why* is this so important to you all of a sudden?
Astrid: Because I want to remember what you say, *right now*.
Hiccup: Oh, for the love of… I was a coward! I was weak! I wouldn’t kill a dragon!
Astrid: You said *wouldn’t*, that time.
Hiccup: Agh, whatever… I *wouldn’t*! Three hundred years, and I’m the first Viking who wouldn’t kill a dragon!
[pause]
Astrid: First to ride one, though. So…?
Hiccup: I wouldn’t kill him, because he looked as frightened as *I* was. I looked at him… and I saw myself.

How to train your dragon – Trailer 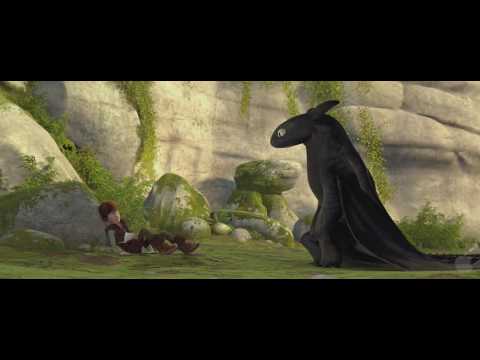 Take a glance at our book review for “How to Train your Dragon”, by Cressida Cowell clicking here!