Plot:
John Cleyton III, Lord of Greystoke (Alexander Skarsgård) is Tarzan. He was born in the jungle and his mother died as soon as she gave birth to him. After his father buried her, some gorillas attacked him and killed him. Kala (Madeleine Worrall), a female gorilla, found the young orphan and raised him as if he was her child, along with her son, Akut (Matt Cross). When Tarzan was a teen, Kulonga (Charles Babalola), son of chieftain Mbonga (Djimon Hounsou) fatally wounded Kala with an arrow. Tarzan could not save her, but he attacked Kulonga and killed him. Mbonga never forgave him, and lives with the hope that someday he will kill Tarzan.

Years have passed and the man who was raised by gorillas, has left the jungle behind him. He met Jane (Margot Robbie), they fell in love, and he learned the ways and the language of humans. He found his identity and claimed his heritance. John Cleyton III became the fifth Lord of Greystoke, married his beloved and they live together in Great Britain.

His new life has its own obligations. Britain and Belgium have divided Congo in two. The Belgian Government is on the verge of bankruptcy. Thus, they have a clear interest to increase the activities of the belgian mineral company in Kongo. King Leopold II of Belgium, has already sent Leon Rom (Christoph Waltz) to Africa and he asks for help from the British Government. The famous diamonds of Opar is the common goal of English and Belgians, who cannot wait to take them from the African land and shove them in their pockets.

Prime Minister (Jim Broadbent) has a meeting with Lord Clayton and asks him to help them. His experience and the acquaintances John and Jane have in Africa are really valuable. John refuses. After the meeting, George Washington Williams (Samuel L. Jackson), a USA diplomatic envoy, follows him. George has reasons to believe that the Belgians treat brutally the locals and even enslave them. This is something that Lord Cleyton cannot tolerate. He decides to travel to Africa, but he wishes that Jane stays in England to be safe. But Jane is a woman with personality and not a helpless damsel.

The three of them arrive in Africa and the first thing John does is to greet three lions he meets. “He has known them since they were cubs”, Jane tells George. They decide to spend the night as guests with a tribe they had contacts in the past.

They know that the Belgians – led by Leon Rom – want the diamonds of Opar. What they don’t know is what’s the deal with the Belgian Captain. Rom and his soldiers had been attacked by chieftain Mbonga. All were killed that day. All but not Rom. Why did they spare his life? Because he promised to Mbonga that he would bring Tarzan to him.

That night Rom and his men attack the tribe’s village. They kill many and they kidnap Jane. George makes a successful counterattack and repels them. He finds John tied with ropes and sets him free, but Leon Rom escapes with Jane.

Rom tries unsuccessfully to terrorize Jane. The young woman stands boldly in front of her kidnappers.

An ordinary man will do impossible things to save the woman he loves. And my husband is no ordinary man..

Yet she cannot escape. She will be their bait to get John. John on his part, will remember his old life and use all the means nature offers and all his abilities. Because he is Tarzan. The Lord of the Jungle!

Our impressions and movie review:
For many decades Tarzan was the favorite hero of many children. And when those kids grew up and had children of their own, maybe Weissmuller had stopped making movies, but they could read a comic book with Tarzan. Because Tarzan – like Mowgli – excites the juvenile imagination. They can do things that everyday people cannot, but they are more realistic than the rest comic superheroes.

Alexander Skarsgård ( “True Blood” ) was chosen as the new Tarzan and he does a good job at it. Besides his stand the charming and great actress Margot Robbie as Jane. She is different that the Janes we have seen in the past, yet she is not a Lara Croft. David Yates is doing an excellent job as a director. The screenplay would need something more to really overwhelm us, but we are prejudiced: we love Tarzan!

The new movie “The Legend of Tarzan” respects the myth and the character of Tarzan, as created by the author Edgar Rice Burroughs and as we became accustomed to him with the films and the comic books. It is great that the producers and the actors of the film take a stand against the ivory trade. 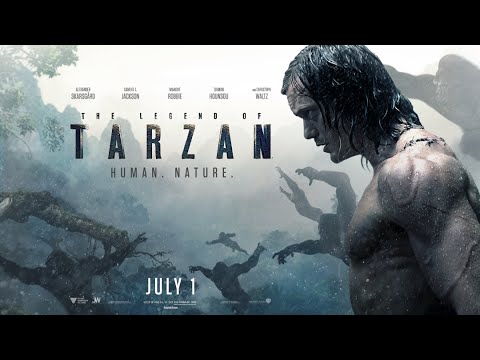 Trivial from The Legend of Tarzan –