Plot:
Casey Newton (Britt Robertson) is a teenage girl with a sparkling brain and dreams for tomorrow. Back at school, her teachers are “bombing” her with their pessimism for the future, but she keeps thinking of what she can do to make our world a better place. Why? Because she wants to change the future!

Eddie (Tim McGraw), her father, used to work for NASA at Cape Canaveral, but now his job has no future and NASA has ordered the destruction of the space shuttle platform. Every night, Casey leaves her home and sabotages the demolition machinery. She believes that by stalling the end, even for a little bit, she does something good. But, one night, she falls into the guard’s attention and the police arrests Casey. Her father pays warranty to release her from jail. A police man gives back to Casey her personal belongings, but, among them, there is a pin with a capital “T” letter. That was definitely not hers. She tries to touch the pin and…

When I touched this pin, I saw this place. Some place… amazing. And it felt like anything was possible!

Every time Casey touches that pin, she takes a glance in Tomorrowland: a World Beyond. An ideal world, a Utopia, where the best scientists and artists in the world, are working together to build the future and give hope and inspiration to all people. How could Casey find the way to get to Tomorrowland?

Frank Walker (George Clooney) is an inventor. Today he has grey hair and he is full of pessimism.

Every second that ticks by, the future… is running out!

Wars, world hunger, poverty have led him to believe that our world is coming to an end. Soon. In 63 days to be accurate! Frank was not always like that. He used to be an optimist like Casey. He used to live in Tomorrowland! Today he looks like a mad scientist, or maybe, like a paranoid man suffering from persecution complex. But… it’s not paranoia if they’re really after you!

A deux ex machina, Athena (Raffey Cassidy), will arrange a meeting for Frank and Casey. Because Frank knows how to return back to Tomorrowland and Casey is our best hope for the future. So we can have a future!

Our impressions and movie review:
The director and screenwriter Brad Bird – a dreamer and visionary himself – along with Damon Lindelof and Jeff Jensen got the central idea for Tomorrowland from EPCOT, an experimental community designed by Walt Disney. Walt did not have time to make EPCOT a reality. Yet, in this movie, Tomorrowland exists and is full of technological wonders. Of course, Tomorrowland is not an ideal Utopia. The screenwriters deal with topics like the conflict between people with a vision and people whose pessimism has kneeled them psychologically, and the confrontation between the effort for a better future and defeatism. This way, they create an original script, with maybe a few ideas more than it should have, yet they manage to win the viewers and keep the suspense high till the end of the movie.

Brad Bird ( “Iron Giant”, “Incredibles”, “Ratatouille”, “Mission Impossible – Ghost Protocol” ) is a very good director and he guides well the actors in their performances. George Clooney is excellent – and because of the script he reminded me of characters that Mel Gibson had played. The talented young actress Britt Robertson stands beside him with an equivalent performance and their combination – the conflict between those two movie characters – plays an important role in the plot. We were amazed at Raffey Cassidy as Athena and Thomas Robinson as little Frank. Against them, Dr House from the TV series, aka Hugh Laurie as Nix.

The movie “Tomorrowland: a World Beyond” premiered on May 22, 2015 in USA, and got the first place at the Box Office, bypassing the incredible “Mad Max: Fury Road“. “Tomorrowland” is distributed by Feelgood Entertainment to Greek movie theaters. It will become a blockbuster and we suggest that you rush to see this movie! 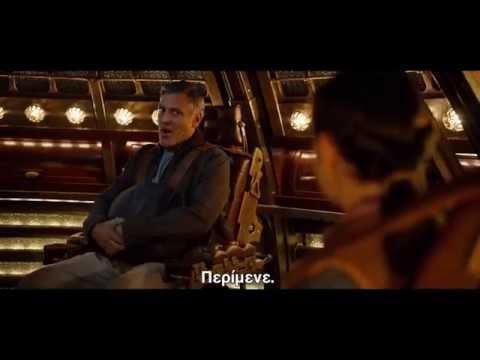 Tomorrowland: memorabilia at the “Blast from the Past” shop

In the movie “Tomorrowland“, you can see a shop called “Blast from the Past” with many action figures and memorabilia for moviegoers.

Movie quote from Tomorrowland: A World Beyond – 2015

Movie quote from Tomorrowland: A World Beyond – 2015

Nix: You’ve got simultaneous epidemics of obesity and starvation, explain that one. Bees butterflies start to disappear, the glaciers melt, the algae blooms. All around you the coal mine canaries are dropping dead and you won’t take the hint! In every moment there’s a possibility of a better future, but you people won’t believe it. And because you won’t believe it you won’t do what is necessary to make it a reality.

Official Site:
You can enter Tomorrowland: a World Beyond, by simply clicking here!