Plot:
It’s been 22 years since the dramatic shutting down of Jurassic Park. Many things have changed since then. Masrani Corporation have rebuilt the Park and gave it a new name: Jurassic World. At last the public has the chance to see real Dinosaurs from a close distance, after paying the tickets of course. But, when the initial enthusiasm is over, the number of visitors declines. This is a major problem for a for-profit corporation. The Geneticians will give the solution with a hybrid Dinosaur: Indominus Rex.

When Indominus Rex will make her public appearance (yes, she is a female), two young visitors arrive at the island of the Dinosaurs. Gray Mitchell (Ty Simpkins) and his brother Zach (Nick Robinson) will see – after a very long time – their aunt Claire (Bryce Dallas Howard). Claire is a workaholic and she entrusts Zara (Katie McGrath), her personal assistant, to give her nephews a tour to the Park. Meanwhile, Simon Masrani (Irrfan Khan), owner of Masrani Corporation, asks Claire to have Owen Grady (Chris Pratt) inspect the security of the Indominus Rex’s enclosure. Owen slovenly character is the exactly opposite of the strict Claire. Yet, he is very good at his work. When they find out the Indominus Rex – the most powerful and intelligent Dinosaur in Jurassic World – has killed two guards and escaped, they know that no-one is safe anymore!

Bryce Dallas Howard gives a rather not good performance and Chris Pratt is so good and so believable that made me think him as the next Indiana Jones. Omar Sy has taken very seriously his first Hollywood movie, and Judy Greer is really good too. Vincent D Onofrio, the villain of our story, is a really good actor and it’s a shame that they gave him this lousy written character. As you may have guessed, the screenplay and the shallow characters is the weakest link. It is not a bad screenplay, but it is far from being perfect. I still cannot understand how they chose the director. The Dinosaurs on the other hand, are so violent and so many that will leave you breathless.

Click here to see the battle between T Rex and Indominus Rex! 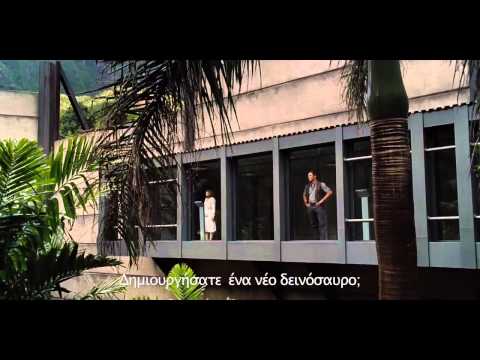 Owen: What happened to the sibling?
Claire: She ate it.

Henry Wu: She was designed to be bigger than a T-Rex.

Masrani: So the paddock is quite safe then…
Claire: Yes. We have the best structural engineers in the world.
Masrani: Yeah, so did Hammond…

Claire: Think it’ll scare the kids?
Masrani: This will give the parents nightmares.

Masrani: The key to a happy life is to accept you are never actually in control.

Owen: These animals are thinking: “I gotta eat.” “I gotta hunt.” “I gotta…”. You gotta be able to relate to at least one of those things.

Claire: We have learned more in the past year from genetics, than a century of digging up bones! A whole new frontier has opened up! We have our first genetically modified hybrid!
Owen: You just went and made a new dinosaur? Probably not a good idea…

[Claire asks Owen to help her find her nephews]
Claire: You can track them by smell or footprints?
Owen: I was with the Navy! Not the Navajo!

Henry Wu: Nothing in Jurassic World is natural, we have always filled gaps in the genome with the DNA of other animals. And if the genetic code was pure, many of them would look quite different. But you didn’t ask for reality, you asked for more teeth.

Masrani: You created a monster!
Henry Wu: Monster is a relative term. To a canary, a cat is a monster. We’re just used to being the cat.