Plot:
Luke Skywalker (Mark Hamill) has disappeared for many years. While he was away, the defeated followers of the Empire and the Dark Side of the Force have created the First Order, a militaristic regime that will rule the Galaxy. To achieve that, the First Order will have to kill the Last Jedi. Of course, they will have to find him first.

On the other hand, the Republic is trying to stand on her feet and supports the Resistance. The old Rebels, with General Leia Organa (Carrie Fisher) on the lead, are struggling with bravery for peace and justice. Leia is determined to find Luke and she hopes she will convince him to aid her. There is someone who may have found Luke Skywalker’s traces and Leia sends Poe Dameron (Oscar Isaac), the best pilot of the Resistance, to find more information.

Poe arrives at the planet Jakku. He meets with the elder Lor San Tekka (Max von Sydow), who gives him the map. The First Order, who watches closely the Resistance actions, attacks and destroys everything in the area. Poe hides the map in the BB-8 android that he has as co-pilot. BB-8 manages to escape the attack safe and sound, but Poe is captured by the Stormtroopers.

Kylo Ren (Adam Driver), a high ranking officer of the First Order who walks in the steps of Darth Vader and dreams to surpass him, will take care of the prisoner personally. Kylo Ren uses the Force to torture Poe, and, despite the brave fight the pilots gives, he learns about the map that the BB-8 unit has.

In the meantime, the little android with the great secret, is wandering in the deserts of Jakku. At some point the robot meets Rey (Daisy Ridley), a scavenger who just found the most valuable thing ever.

-Where do you come from?
[he answers with tones and beeps just like R2D2]
-Classified? Really? Me too.

A Storm Trooper, FN-2187 (John Boyega), feels disgusted with Kylo Ren actions, and he decides to desert and help Poe Dameron escape. The fact that Poe is a pilot, makes everything easier. They steal a TIE fighter, but their escape is made known quickly and every Storm Trooper is after them.

General Hux: He escaped and he had help. One of our own. We are checking the registers now to identify which stormtrooper it was.
Kylo Ren: The one from the village. FN-2187.
…
General Hux: No prior signs of nonconformity?
Captain Phasma: This was his first offence.

Their spaceship is shot down. When Finn (that’s the nick Poe gave him) comes back to his senses, he sees no sign of Poe and believe that his new friend did not survive the crash. When he meets Rey and BB-8, he decides to claim that he is part of the Resistance and he wants to continue Poe’s mission. Finn and Rey will protect the android from the First Order and they will try to get the map for Luke Skywalker to the Resistance!

Our impressions and movie review:
J.J. Abrams manages once more to surpass himself, both as a director and as a producers for the new Star Wars film. “The Force Awakens” is surely better than the “Clone Wars” trilogy and deserves to stand side by side with the original trilogy. The script, written by Lawrence Kasdan, Michael Arndt and J.J. Abrams, is very good, with elements that reminds us of “Star Wars: A New Hope” and “The Empire Strikes Back”. BB-8 is the “new” R2D2, Kylo Ren is the “successor” of Darth Vader (they share the same ambitions, but they differ too much as characters), and there are characters who will “take” the position of the Emperor and – more or less – Luke. Best of all, J.J. Abrams manages to stay true to the Star Wars spirit and sets good foundations for the new trilogy.

The young protagonist, Daisy Ridley is a surely a very promising actress, yet the weight that fell on her shoulders was particularly heavy. Adam Driver was very interesting as Kylo Ren, but the unavoidable comparisons with Darth Vader made part of the audience to find him insufficient. John Boyega is very good and Oscar Isaac is amazing. Amazing also are the actors of the original trilogy. Harrison Ford (Han Solo), Carrie Fisher (Leia), Mark Hamill (Luke Skywalker), Anthony Daniels (C3PO), Kenny Baker (R2D2) and Peter Mayhew (Chewbacca) put their touch to the new film, without overshadowing the younger actors. Many great actors have small parts or make cameos in the film, like Max von Sydow, Simon Pegg, Thomas Brodie-Sangster, Gwendoline Christie and Daniel Craig.

“Star Wars: The Force Awakens” premiered on December 14th, 2015. This is a very good movie, that the Star Wars fans will enjoy, and so will those who want to see a good adventure film, with lots of humor and many action scenes. May the Force be with You! 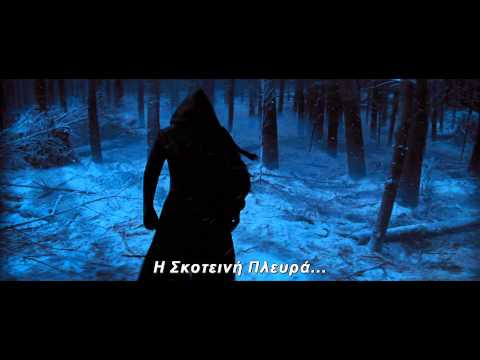 Kylo Ren: There’s been an awakening. Have you felt it?

[looking at Darth Vader’s skull]
Kylo Ren: Forgive me. I feel it again… the call from light. Supreme Leader senses it. Show me again, the power of the darkness, and I’ll let nothing stand in our way. Show me, grandfather, and I will finish what you started.

Rey: There are stories about what happened.
Han Solo: It’s true. All of it. The Dark Side, the Jedi. They’re real.

Maz Kanata: I have lived long enough to see the same eyes in different people. I see your eyes… I know your eyes!

Maz Kanata: I am no Jedi, but I know the Force. It moves through and surrounds every living thing. Close your eyes. Feel it. The light. It’s always been there. It will guide you.