Episode Plot with small Spoilers:
Tywin is not among the living anymore and everything is getting ready for his funeral ceremony. Cersei goes to the temple where the corpse of her father is kept, and she has an interesting conversation with Jaime – her brother and lover – over the lifeless body of their genitor.

Tyrion and Varys finally arrive at the free city of Pentos. Based there, at the east of the narrow sea, they will continue their machinations and play their own role in the ongoing “Game of Thrones”.

Further east, Daenerys continues her own path, which is strewn with little roses and many thorns. She tries to do what her heart and mind command, and her ultimate goal is the conquest of Westeros.

Moving northwest, and more specifically to the Wall, we meet John Snow who trains his young companions, trying to improve the fighting skill of the Night Guard. In the same place we can find Melisandre and Stannis Baratheon, who have their own plans for the Wall and the people north of it.

Petyr and Sansa are making their plans too, while they are responsible for the “protection” and the “prosperity” of Robin Arryn, and at the same time Brienne and Podrick roam in the downtown of Westeros, searching to find what they will do in the near future. 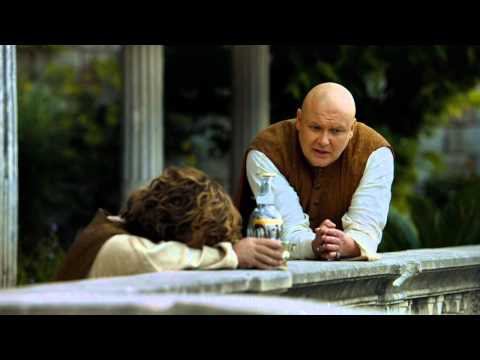