Plot:
Robinson (Jude Law) is a former submarine commander who is now unemployed. His obligations and the financial difficulties will force him take a foolhardy decision. He will lead a crew of Russians and British who will search the depths of the Black Sea for the lost Nazi gold. It seems that the most difficult task will be to get a submarine. Daniels (Scoot McNairy) will help, whose rich employer is willing to take risks to increase his wealth. It will be easy to find men, because of the unemployment and the economic crisis. Captain Robinson intends to cut equal shares of the profits for every crew member. But, wherever is gold, greed follows. Some men think that for every man who dies, the share of the rest increases. And the Black Sea beckons relentless for their mistakes, to keep them forever in her depths. Where their El Dorado is, the lost gold of the Nazis. Will they succeed in becoming rich?

The movie “Black Sea” is a claustrophobic thriller for strong guts. The first 45 minutes of the film pass a bit slowly, with the screenwriter Dennis Kelly introducing the protagonists and building up the plot. The language barrier between British and Russians, greed and suspicion do not take long to cause tensions among the crew members. Jude Law as the submarine commander, holds firmly the reins, but he cannot prevent conflicts with his power. The suspense in the second part of the film is very intense and the director Kevin Macdonald is doing his job very well. The film “Black Sea” was released in Greek cinemas on February 26, 2015, by Odeon. 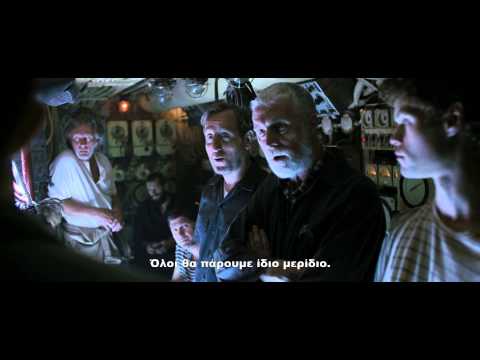 Quote from the movie Black Sea

-Robinson you can’t be serious. This wreck? This wreck is gonna sink!
-Fuckin’ useless sub if it don’t!

Quote from the movie Black Sea

-We just want to live more. Can we just live?