Plot:
Billy Hope (Jake Gyllenhaal) just won the boxing finals. He is the lightweight world boxing champion – something rare for a southpaw (lefthanded) boxer. His wife, Maureen (Rachel McAdams), believes this is the best timing for him to retire, now that he is at the zenith of his fame, and Billy agrees with her. He wants to spend more time with his daughter Leila (Oona Laurence). After a charity event at “Monte Carlo Casino Night”, an upcoming boxer Miguel ‘Magic’ Escobar (Miguel Gomez), provokes Billy to get the media attention. Billy ignores him at first, till Miguel offends Maureen. The two of them begin to fight and Hector Escobar (Danny Henriquez), when he sees his brother being beaten, he pulls a gun and shoots. The bullet hits Maureen who leaves her last breath on her husband arms.

The death of his wife is the breaking point in Billy Hope’s psychology. He starts drinking, he fights with a referee after losing a boxing match and he searches for Hector. He finaly finds him hidden in his woman’s home, and he decides to forget about taking revenge, after learning that Hector has a kid. The sports court suspends him for a year for hitting the referee. The former boxing champion is now an outcast. And the knock out hit comes when the Child Protective Services take custody of his daughter Leila, because Billy Hope is an alcoholic.

They say that a friend in need is a friend indeed, and this is certainly the case for Billy, because his friends help him – or “force” him to continue. They convince Titus Wills (Forest Whitaker), a veteran boxer, to accept Billy in his gym. This way Billy has a job and a chance to practice boxing. In the meantime, his former manager Jordan Mains (50 Cent), works now for Miguel Escobar. When he hears that Billy is not an alcoholic anymore and that he has started boxing again, he tries to convince to have a match against Miguel Escobar. Everybody believes that Miguel will win, making Mains richer. But this fight is the last chance for Billy Hope to take his life back. To stand on his feet and get the custody of his daughter. Will he make it?

Our impressions and movie review:
“Southpaw” is the first work for the cinema of the screenwriter Kurt Sutter, known from the TV seris “The Shield”, “Sons of Anarchy” and “The Bastard Executioner”. Antoine Fuqua does an excelent job directing this movie. Jake Gyllenhaal, a good actor, is better than ever. Some journalists even suggest that with this movie he can win an Academy Award! Pay attention to the young Oona Laurence who plays Leila Hope. This young actress, who has performed on stage at Broadway for Matilda the musical when she was just 10, is really talented. In tgis movie you will also enjoy seeing Rachel McAdams, Naomie Harris and 50 Cent, who besides his “bankruptcy” still tries to become a known actor. On the other hand Forest Whitaker, helps the movie with his strong presence.

“Southpaw” premiered in Greece on July 23rd, 2015. This is a movie with many boxing scenes – do you remember Rocky? – with the ambition to go one step beyond with a good screenplay. Maybe the plot needed more time than the boxing games. Anyway, this is a movie that will raise discussions (mostly among men cinemagoers), and this movie is waiting for you in a cool movie theater, or in a wonderful summer cinema under the stars! 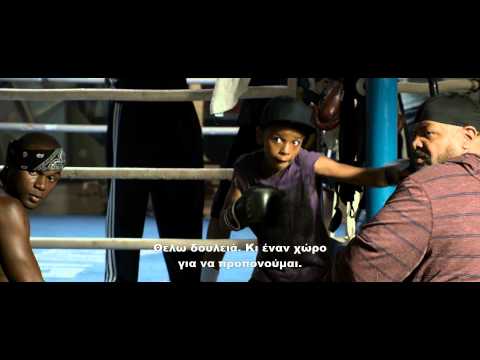 The more they hit you, the more you fight.