Plot:
Thorin and Company (13 dwarves and Bilbo, a hobbit) have captured the ancient Dwarven kingdom of the Lonely Mountain (Erebor). The might Smaug, the dragon that used to live there, wants to destroy the nearby mountain town, Lake-town. Smaug spreads fire and death but find his own end, when Bard, a fearless inhabitant of Lake-town, kills the dragon. This outcome suits well Thorin and Company, but this is not the last of their problems. Humans and elves demand a share of the treasures he found at the Lonely Mountain. An army of dwarves arrives, to help their fellows in the ancient Dwarven Kingdom, and a battle is about to begin with gems and gold as a prize. Gandalf the wizard arrives just in time to inform them that an army of Orcs is approaching. The opponents became allies to defend their lives!

Our impressions and movie review:
“The Hobbit: The battle of the five armies” is the third – and last – film based on the book Hobbit by Tolkien.

The movie trilogy are loosely based on the book for the spine of the plot. The rest is fiction from the screenwriters, with the third movie having the fewer elements from the book. This is the main difference between the Hobbit trilogy and the “Lord of the Rings” trilogy. Tolkien have never weaved a plot to support or to present a battle. A battle was the natural consequence of a complex fictional story. In the “Hobbit” films the things are just the opposite. Thus, even if they are pleasant to see, they just have a faint aroma of Tolkien’s work. Either way, I have enjoyed this movie and I believe so you will! 🙂

The Hobbit: The battle of the five armies – Trailer (Greek subs) 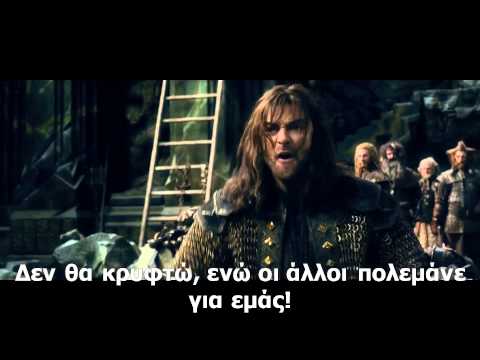