Since then, 26 years have passed, and Peter calls himself Star Lord and, despite the impressive alias, he is a mere thief in outer space. But, when he steals a mysterious Orb, thing begin to take an unexpected turn. Korath, having failed to prevent him from stealing the Orb, reports to Ronan, the Accussor of Kree Empire. Ronan in turn, wants the Orb to offer it to Thanos as an exchange for the destruction of Xandar, the base-planet of Nova Corps, a space police force. Gamora offers to chase and get Peter Quill.

Peter is on Xandar and he is trying, unsuccessfully, to sell the Orb on the black market. Gamora meets him and attacks him, but, on the same time, he is attacked from Rocket Raccoon and Groot, who wants the price for Peter’s head. Not a very smart move in a planet full of police officers, don’t you agree? And indeed they catch them and send them to prison-planet Kyln (actually it is an artificial satellite but you get the point). Our protagonists escape and discover that the Orb contains an Infinity Stone, which, if it falls into the wrong hands, will mean the end of the world. So, they decide to make a new start in life and to try to stop the bad guys and save the world and not only… because now, they are: the Guardians of the Galaxy!

Guardians of the Galaxy is a movie based on Marvel Comics Guardians of the Galaxy. The strength of this, too much advertised, movie lies on the funny scenes. Many of these are related to the walkman of Peter Quill! Remember that he was just a little kid in the 80s when he was abducted by aliens. There are also some good puns and gags with Peter’s quotes and his way of thinking. He is a such a wannabe but he has a great heart too!

Many good actors have a role in Guardians of the Galaxy. Among them are Zoe Saldana, Djimon Hounsou, Glenn Close, Benicio del Toro. However, James Gunn does a mediocre, and sometimes bad, job as a director. Additionaly the writers tried to fit into the scenario too much information and too many comic book characters from the Marvel Universe. But I did find funny that the Collector, who has an eye on the Infinity Stone too, has in his collection Howard the Duck and Cosmo the Spacedog. If you are a comics fanatic or a fan of Marvel movies, you will see it for sure. Otherwise you will pass…

Movie Quote from Guardians of the Galaxy

Rhomann Dey: Drax aka the Destroyer. Since his wife and family were killed, he’s been on a rampage across the galaxy in a search for vengeance.
Gamora. Soldier, assassin, wanted on over a dozen counts of murder.
Rocket. Wanted on over 50 charges of vehicular theft and escape from custody.
Nova Corps Officer: What the hell?
Rhomann Dey: Groot. He’s been travelling recently as Rocket’s personal houseplant slash muscle.
Peter Jason Quill. He’s also known as Star-Lord.
Nova Corps Officer: Who calls him that?
Rhomann Dey: Himself, mostly. Wanted mostly on charges of minor assault, public intoxication and fraud…
They call themselves the Guardians of the Galaxy.
Nova Corps Officer: What a bunch of assholes.

Movie Quote from Guardians of the Galaxy

Nova Prime Rael: The fate of 12 billion people is in your hands.
Peter Quill: Hold on a second, you’re being serious right now? 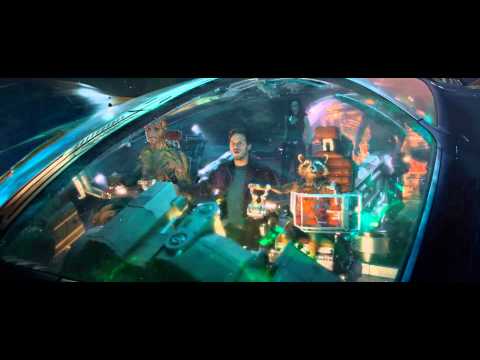 To see Deleted Scenes from Guardians of the Galaxy (2014) click here!