Plot:
Have you missed Lloyd Christmas and Harry Dunne? That’s natural! Twenty years have passed, both in our own world (the first film was released in 1994), and in their own. What were they doing all this time? Not many things… after all they are Dumb and Dumber. Lloyd was committed, and on the clinic they give him antidepressants. Harry visits him every week. Until, one day, Harry tells him that doctors have diagnosed that he needs a liver transplantation, or he will day. At that moment, Lloyd breaks his silence and admits that all these year he was pretending to be catatonic to make Harry a prank! So, they leave the clinic together to find Harry’s daughter. She is his only relative and his only chance for a matching donor. As you can already guess, everything will become a mess, or should I say madness? Let’s be even more precise: it’s Dumb’s and Dumber’s time!

Our impressions and movie review:
“Dumb and Dumber To” follows the path of the first movie, with Jim Carrey and Jeff Daniels in the lead roles, and has 109 minutes of abundant laughs and some emotional moments. I believe this sequel is better than the first film, even though the passage of time is evident in the faces and the movements of the protagonists. I am sure you have seen the first movie, so I urge you to watch this fresh approach of those loveable dumb fellows. I am sure you will laugh with your soul and that’s what we all want 🙂 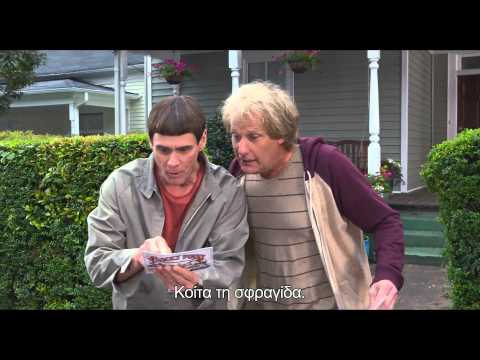