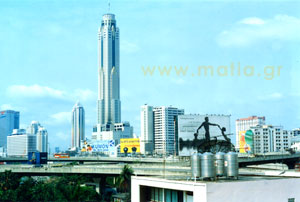 A Boeing 747 of Thai Airways was in the airport, waiting to take us to one of the most popular destinations in Asia, Tailand. We entered the airplane and our journey would last for about ten hours till Bangkok, Tailand’s capital.
Tailand is located in Indochina peninsula, in southeastern Asia. Tailand has 513.115 square km area, almost four times as the area of Greece, and its population is 57.789.000, about five times the population of Greece. As we mentioned, the land’s capital is Bangkok, in which live 8 million people, that is about 13 percent of the total population of the land.
Tailand’s adjacent countries are Burma (west and northwest), Laos (east and northeast), 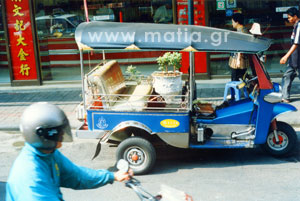 Cambodia (southeast) and Malaysia (south). Tailand’s national religion is Buddhism. Even if the national language is the Thai language of the Tai language family, many Thai know English, so it won’t be difficult to communicate with the locals. Finally we should mention that Tailand’s currency is baht and 48 bahts equal to 1 euro.
It should be mentioned that if you are smokers, you will suffer a bit on the way to Tailand, because smoking is not allowed in the airplane. It is very likely that the first thing you will do when you get to Bangkok’s airport is to strike a light, or at least we did. But be careful, smoking is allowed only in certain areas of the airport. If you can’t find the smokers area ask someone to show you and smoke for as much as you like these were ten hours of abstinence! 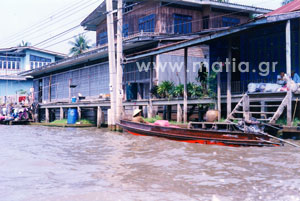 When you exit the airport, Bangkok’s warm and humid atmosphere welcomes you. The climate is tropical, aka it is warm no matter the season you choose to visit Tailand. Even at winter, the temperature won’t get under 25 Celcius points. So, care to take take clothing with you. Another thing you should care for are the clothes you should wear when you go sightseeing. In temples but also in some other places, short trousers, miniskirts, blouses without sleeves and in general anything not decent are prohibited. So you should take with you, among the others, some ‘decent’ clothing in your luggage, to be able to visit those places. Talking about your luggage, you should have in it an anti-mosquito lotion or something similar. 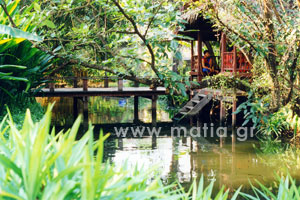 Mosquitos attack in dozens, so it’s a good idea to take care of your ‘anti-aircraft’ protection.
Bangkok, with Chao Phraya river crossing it, is the city of contrasts. Skyscrapers are along with sheds, expensive cars with tricycles, richness with poorness and the modern with the traditional. The heavy traffic and Thai’s way of driving will impress you. You can rent a car, but it’s not a good idea. It is much safer to take a taxi or a ‘Took-took’ tricycle. The city’s sights are many and visiting them will leave you astounded. Among them are the Temple of the Emerald Buddha, the Grand Palace, the Temple of the Golden Buddha and many more. You will probably go to Tailand via a travel agency. That’s the best choice, because the agency’s guides will take you to all the places which are worth to see and inform you about them. 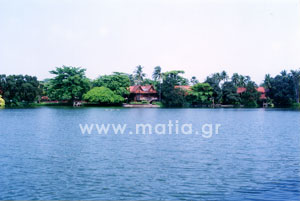 The sights we’ve just mentioned represent the city’s traditional face. But Bangkok has also a modern face that is represented by the big shopping malls, the luxury shops and of course, Bangkok’s nightlife. In the shops, you can buy from perls and silk clothes to fine imitations of known brands of clothes and beautiful wooden sculptures. While talking about Bangkok’s nightlife, it is clearly a matter of personal taste. Everything is in Bangkok by night. No matter what else you choose, don’t forget to ask your guide for a massage centre and there you are sure to have an enjoyable and relaxing massage.
If you are a couple, you can continue your night with a romantic dinner in one of the many city’s restaurants or you can go for a drink or dancing in one of the exciting night clubs. 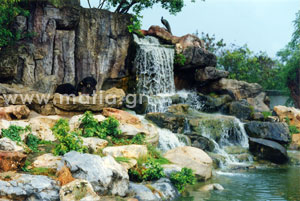 On the other hand if you are a bachelor, the famous Sex Shows of Bangkok await you.
But we haven’t spoken yet about the Thai cuisine. To begin with, it’s a good idea to drink only mineral water. Usually, the hotel’s hosting groups from one country get their boufet choosen dishes from their homeland. For instance, we found on our hotel’s boufet even mousakas. But it’s a pity to go to a country and not to try their cuisine. Thai dishes are very spicy and include a lot of vegetables. Personally, I didn’t found the fishes tasty, while they were combined with some other ingredients, like honey. In general, Thai cuisine is pretty good and as we said, there was mousakas for anyone who didn’t like the local cuisine. 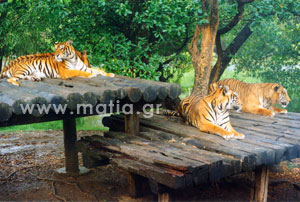 As Greece isn’t only Athens, Tailand isn’t just Bangkok. The land’s relief includes high mountains covered with forests, fertile plains and of course the beautiful Tailand’s islands with the exotic beaches. Rivers and jungles full of animals known to us only from documentaries or zoos. The travel agencies have in their programs visits to places where you will be able to see those animals as much as visits to beaches where you would wish to live forever.
You will see and experience so many things in Tailand, that your travel there will be one of the best ones you will have done in your whole life. Tailand, the land of contrast, awaits you.